The Journey of the Yoga of Guitar: Guitar, Yoga, and Connection. 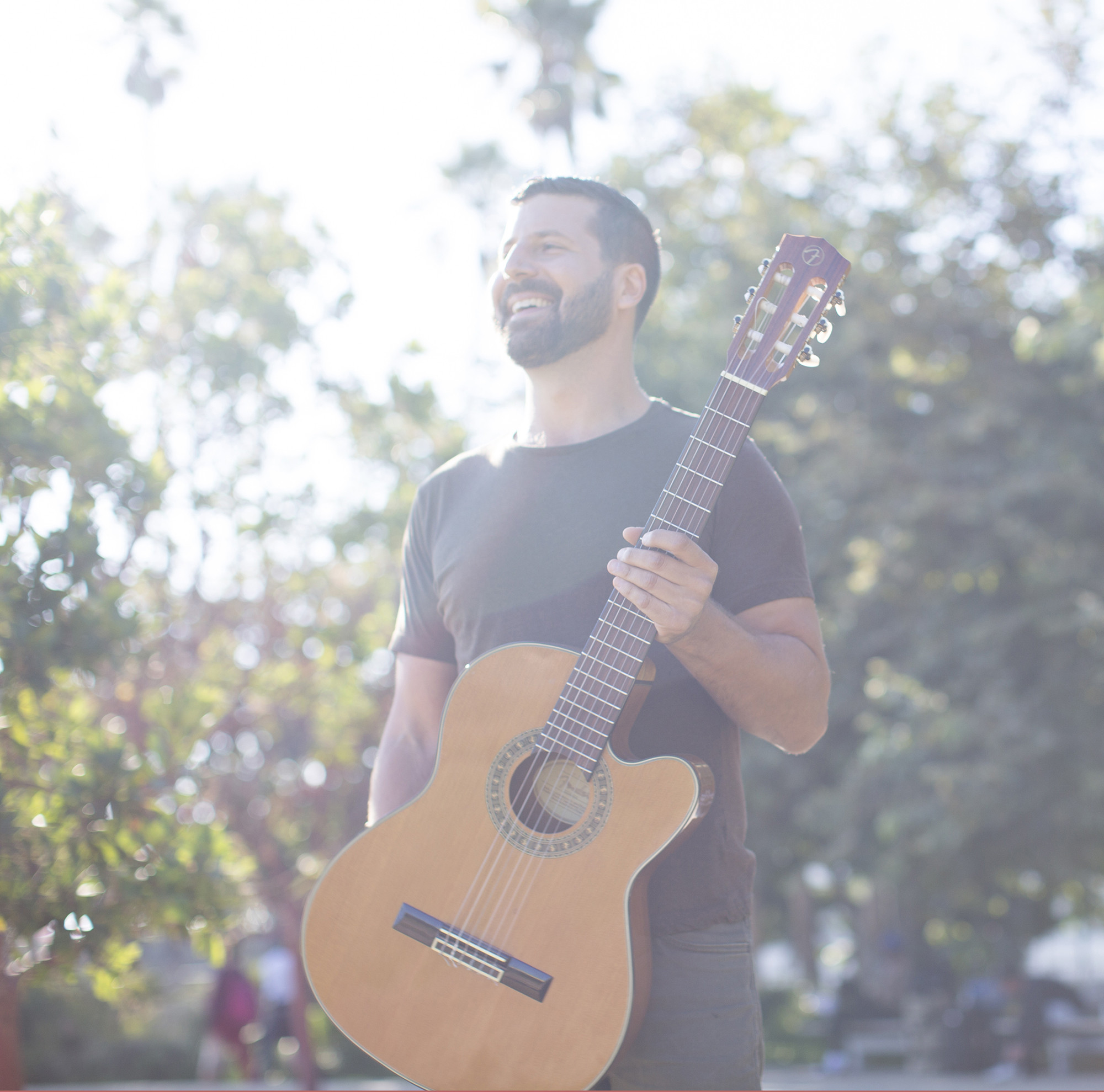 I’m sure we’ve all have heard the phrase “The Journey of 1000 miles begins with one step.” In our Guitar Yoga adventures, perhaps we’ve even extracted some of the juice of this ancient wisdom and have found ourselves on either the beginning middle or even completion of a 1000 miles journey. Sitting here right now in this moment, I am called to reflect on a bit of my own 1000 mile (28 year) journey of the Yoga of Guitar, which for now can simple be understood as playing the guitar as a yoga practice.

My path of the Yoga of Guitar begins with this memory:
With a great relaxed clarity and ease I can recall my first guitar lesson. As I sat in the lesson room, I remember inhaling deeply the unfamiliar new guitar smell of wood and glue while exploring this new instrument in my lap. With an exhale of excitement I had begun what would amount to be a journey that would shape my life. My guitar teacher, a gentle and patient man began to tune my guitar and my intoxicated gaze watched as he seemingly and magically made the sounds of my guitar come alive. Just like my first yoga class, the guitar was quite the challenge. The teacher gave me instructions on where to place my fingers on the guitar neck, like my body on a yoga mat, yet it seemed like my fingers had a mind of their own, or more precisely: mindless. At the end of my first guitar lesson, I was given my practice for the week: The G chord and D chord to play Michael Row Your Boat.

And thus my Yoga of Guitar practice began, however as simple as these two chords were, they proved to be impossible. This guitar yoga was no joke.. The G chord I was shown at the time had only one finger placed on the neck and it didn’t take much time for me to master this. If this guitar chord were a yoga pose it would be like standing in tadasana or mountain pose, a very simple expression of the body. The other chord D however proved to be my nemesis. I clearly remember feeling how simple and easy this one finger G chord was, but the D chord were a guitar yoga pose, it would have been more like a pretzel.

For that first week, day after day I put in my 30 minutes of Yoga of Guitar practice, until finally towards the end of the week the D chord rang out clearly and it was as if the trumpets of the angels called my name. “I had it” I thought. The music came alive at my fingers and all of a sudden, that inspiring feeling of a breakthrough taught me a lesson I will never forget, even after all those years. I remember making a mental note to hold onto the feeling of how impossible the D Chord felt at the beginning of the week and how now, I am able to do it and perhaps the rest of the guitar yoga I would be doing would follow the same pattern. Even at the young age of 8, I received a universal wisdom from this yoga which was to trust in the process, keep practicing, and the impossible might just become possible.

The depth of what I gained from these first experiences can be minded for the rest of my life I suppose. One of the gems that is particularly sparkly to me at this point, calling out my attention is that when we take on a yoga practice and even specifically a guitar yoga practice such as the Yoga of Guitar, we begin to open up to a higher intelligence that can be found within. The guitar, like yoga are tools to experience our limits and grow beyond them. Sometimes it might be the simplest things that create the greatest challenge. The Yoga of Guitar puts us face to face, breath to breath with our self in the moment. As we develop greater presence and awareness, we find that we open up a space for music itself to become our teacher. It is this that we find our true purpose doing guitar yoga in the Yoga of Guitar.